What’s behind 7 ” tablet with 1Gb ram , Quad processor and IPS display for $84 you can read next in this review.

I have ordered tablet for $84 from Banggood (with -$6 coupon which I can share in the comments). It was shipped next day and came in 22 days. So far I am very satisfied.

It weights only 240g

For some time I was looking for a tablet which is not too expensive, but you can still do something with it. For 100$ I couldn’t find any good tablets in local store. Searching for them on internet I first found Alffine Fine 7 tablet for around $90 with a slightly lower screen resolution. With further analysis of Fine 7 tablet- I have concluded that rotating the screen also changes the contrast/backlight and I lost interest in Fine tablet, same problem with screen has Pipo S1 Pro. My choice was tablet Colorfly E708 Q1 which costs only $84 or about 62 Euro. I have order it without reviews on the web and now after using it for a week I could tell you that I have made a good choice. Price is attractive, but what’s behind it?

It has powerful Quad processor Allwinner A31S Cortex A7, graphics processor is PowerVR SGX544MP. Internal memory is 8Gb where you will have enough space to put all your photos and apps (or you can put them on MicroSD card). 1GB of RAM ensures fluid operation in Android 4.2.2 which comes with the device. The biggest advantage is beautiful 7 inch IPS screen with resolution of 1280×800 which is really a rarity in this price range. And to make things even better it weighs only 240 grams and it is light like a feather. It is extremely easy to carry.

For comparison, in local store I could buy only tablet which offers 512MB RAM, single-core processor which in practice means slow opening applications, you wouldn’t be able to play any type of the games and the screen would have a resolution of 800×600 with horrible viewing angle.

Unpacking from the box, the first impression

Tablet came in a box of styrofoam, and in a well- protected cover made of bubbles. The package contains; a tablet, USB cable and 5V/2A charger. Minus thing is U.S. Charger with EU adapter which leads to the fact that when you remove the charger from the outlet that small EU converter remains attached to the socket, so you will have to remove that small part too again. Not so much a lack but they could place the original EU adapter inside the box. Screen protector has been applied without bubbles and fingers on it leaves no trace.

In addition, for $ 10 you can order a special leather case for this tablet.

First turning on lasted about 8s , tablet has very fast start. Touch is accurate , there is no deviation. Google Play has come pre-installed on the tablet, and there are only two Chinese applications that can be uninstalled. OS is Android 4.2.2. Mine came with 1.07 build from 02/September/2013 . It is funny but true, the disadvantage from this version is that you can’t capture the screen. Ie Screenshot is disabled. Installing applications like Screenshot UX and then capturing you get black image with Colorfly logo on them. Meanwhile, several recent version came out that remove the bug. For this reason the images on review were taken with the phone and not directly from ss. 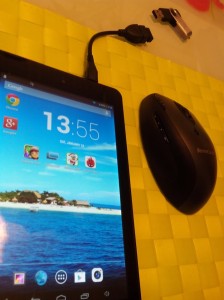 Although not specified tablet supports OTG. I have tryed connecting USB 4GB flash drive, wireless mouse and everything is supproted. That is big plus. However, you need to buy OTG cable separately (not included) but price is only $1.

The display is as you already know 7 inch IPS with 1280×800 resolution and 16:10 aspect ratio. It looks great on paper and it is good in reality. Brightness of the screen is great, it can be used at the sunny day without any problem. Viewing angle is excellent, from every angle you look at the display, everything is is the same, full of colors. The ratio of 16:10 is slightly narrower than 16:9 models. The resolution of 1280×800 is really great, small text can be easily understood, there is a lot of details. Reading newspapers on the web is easy, requires no effort and you don’t need to zoom  and you don’t hurt your eyes from reading.

Antutu benchamrk shows score around 12-13 000 which is great for quad-core processor with 1GB of RAM.  At the same time you can open browser with 3 tabs and then open a game that will work without problems. My previous tablet with 512MB of RAM choked, I couldn’t open most ordinary news portal without a major stop. Colorfly opens all quickly, you can play one of the most demanding games Real Racing 3 without any problems, Minion Rush, Angry Birds… all loads quickly and games are fast, without low fps.

Although it might mean to someone, Q1 has no bluetooth. In addition to USB and headphone jack another plus is that it has a HDMI output. I connected tablet with the television and watched the movie on TV which I played from tablet . This is usually characteristic of tablets that cost more than 150$.

More advanced users will want a little more, like rooting tablet. I have made a tutorial how to root and upgrade firmware which you can find here. Colorfly E708 Q1 is extremely popular in China , and it is only starting to come in other markets including the European. It is interesting that Colorfly is one of the largest manufacturers in China and they have a European branch/office in Germany who you can contact.

Screen and view angle is excellent. Minion Rush can be played with high FPS

Built-in 8GB capacity can be expanded with a memory card up to 64GB. The speaker on the back is loud enough, although not fully understood at the highest setting. Camera is only at the front and it’s enough for Skype. For what is meant, it is just fine. Wi-fi signal is good, it catches at a great distance , the connection does not break.

Colorfly E708 Q1 will not get heated if you use it for long time, it becomes a bit warm but not so much that you can hold it in hand. It isnt slippery and it holds easily in hand.

The battery has a capacity of 2400mAh which is not so much but it is enough. You can use it about 4 -5h without any problems with constant wi-fi, it also can hold out several hours of gameplay. It is quite satisfactory. From 0% to 100% tablet is charged for about a half hour- 45min because of strong charger. It also supports charging via a computer or USB power. Colorfly E708 Q1 could be used at work or school where it would last one day without any problems.

If you’re wondering which tablet to buy and you mean to go up to 130$, I recommend you this tablet. Colorfly E708 Q1 cost only $84 with free shipping. Tablet has a high build quality- Quad processor and 1Gb ram will be a good choice for you. The screen resolution is excellent and you can use it in direct sunlight. And the best, it weights 240 grams, you can carry Colorfly everywhere with you and the time will pass more quickly if you have one. Really it is worth to take.  If you have any questions, feel free to leave it in the comments.