I have ordered iNew v3 for 181$ from Banggood(191 -10$ coupon which I can share in comments). Ir arrived for 22 days and now I have phone more than 1 month. In next, you can read my review of this great phone. 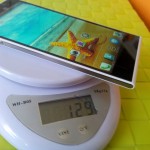 iNew v3 has quad core processor MTK6582- 1.3Ghz,  1Gb RAM and 16Gb for storage. 5 inch screen with 1280×720 resolution is great for this price range, IPS technology gives us great viewing angle. GorillaGlass2 screen is scratch resistant. Weight of phone is only 129 grams which is extremely easy for 5″ mobile phone. What surprises everyone when I show them my Inew v3 is compactness . Although this is a somewhat larger smart phone because of the 5 inch screen, it will without any problems slip into a pocket , and as is so light and thin that everyone had it in their hands they told me that they were easier to keep the 5 “mobile than their 4 ” or 4.5 inch . It feels right in the hand , thickness is only 7 – 8mm and its design is innovative . The screen is almost edge-to- edge.

Currently it is selling only white device while in the future there will be black and gold model.

The device has the ability to support 2 SIM cards (Dual SIM), it supports all 2G/GSM frequencies while 3G supports is only on 2100MHz.

It should be noted that only one slot is for 3G network and GSM while other work only on slower 2G network. Also, one SIM slot has a standard SIM card while other is a MicroSIM card. Inew v3 supports OTG and NFC. 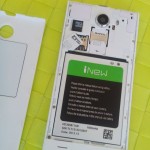 The mobile phone is well protected in a letter and a box was undamaged. In the package there is a cell phone, battery, power adapter, USB cable, foil, leather case and headsets. The back fits well, nothing creaks and is relatively difficult to remove the cover. It is very easy to hold because of that light weight. It has an LED notification which flashes red and green.

The foil on the screen is a promotional and it is necessary to remove it and put the other. Depending on your skills, it depends how well you will place new screen protection. Unfortunately, with two attempts I now have two large bubbles on my screen. Phone is ready after turning for only around 10s, the animation is beautiful. Phone is run on Android 4.2.2 with preinstalled Google apps like Google Play, Gmail and Chrome. 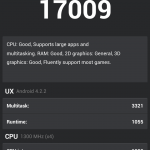 Mobile phone has the latest generation of MTK quad processor MTK6582 (4×1.3ghz), which is slightly stronger than the previous one and graphic chip is now dual core Mali400MP2 (old MTK6589 has a single-core). As the previous generation could run more advanced type games like Real Racing 3, Dead Trigger 2, Despicable Me without any problems this means that on this phone it will be even faster with more FPS. Opening all applications is quick, there is no lag. Screen precisely accepts commands and the response is excellent, does not have to be hard-pressed, despite the foil and light touches is nicely recognized. Benchmark result is about 17 000 and phones which has that score costs like 400$ in local stores. Antutu score of 17,000 is really impressive. 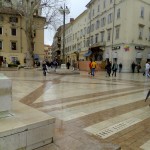 13Mpx Camera and FullHD video is  fascinating.. Photos are full of color, details. Selfie or pictures of friends in the dark will be good but do not expect the quality of the flash as on a real camera. I had a problem while I was writing a review because the weather was cloudy but regardless of the time the pictures are great and bright which is a big advantage. Hand doesn’t need to be calm to take a good picture. 1080p video (FullHD) is the same quality , auto focus is nicely and it smoothly sharpens the image. Flash on the other hand is not very strong but quite sufficient for a picture with the subject in the near. Sony wide angle camera (manufacturer states that it is Sony) in practice means that a larger field of view , the edge is not cut off , the video and the pictures are larger.

Here are a few examples of photographs taken with Inew v3: 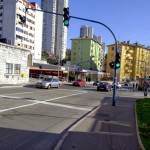 Photo on the sun 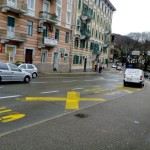 Photo on the rain 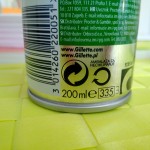 The battery of 1830mAh brings autonomy of 1-2 days in low usage or during intensive one day, in the evening it needs to be charged. This is quite normal on Android devices and this Chinese phone of its light weight can’t have a larger battery. Extra batteries cost only $6 and if you go on a trip, you can easily  keep a spare in your backpack. Battery for some may be a disadvantage, but the cell phone can hold for one intensive day if you unplug it in the morning. IPS screen has a large number of colors, due to the high resolution 720p movies are great to see on screen, and in the sun the screen is quite good visibility. Indeed, it is much better than the famous names and their screen. Gorilla Glass 2 means that the screen has tighter construction, it is scratch-resistant which is a big advantage.

Now, one thing that will surely delight you is GPS. 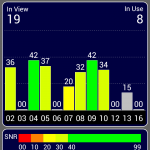 While some other MTK phones requiers a lot of tutorials and apps for GPS to work and even then GPS is not most accurate here this is not the case.

I went on balcony after using phone for 5min after unboxing it without any tutorials or anything . And it found satellites for 10 sec with accuracy of 1-3meters . GPS is extremely accurate , satellites are here. Even in a closed apartment it can found some satellites . After training with MyTrack path that you are walking/running is identical to the one you’ve been through, you are not walking around the buildings . Navigation while driving is also good , no more continuing driving down the street even though you turned to another or placing in a neighboring street as it was once known to happen with my old Cubot GT99 . If you are a person who travels a lot and you need reliable mobile phone with a good GPS I recommend this phone . iNew v3 does not have to be on level ground for compass to work which is a big advantage for someone who hikes. 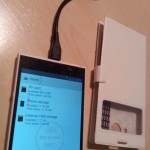 OTG: OTG is a function that allow us to connect USB stick, mouse or keyboard on iNew with OTG cable. This works just fine but down size is that you dont get a cable but you can order it from ebay or Banggood for only 1$.

NFC technology isn’t really widespread in my country so I can’t tell you how it works but phone could see my NFC bank card so I think it works.

iNew v3 has surpassed all my expectations. It is only 8mm thick and weighs 128 grams. His design is elegant and it will very well sit in your hand and you will fall in love at first sight. The camera and GPS is just one of the many advantages of this mobile phone. I don’t see a point to pay $400 for phone in local store because I can get all that which that phone offers for only $179 with free delivery in 3 weeks. This now becomes my primary phone. I would recommend you to buy it.

If you have any questions and if you want $ -10 coupon, feel free to leave a comment.