I finally got Cubot X6  in my hands. I have bought this Chinese phone for 169$ from Banggood. 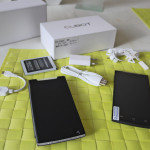 CUBOT X6 is not a standard Chinese smatrphone. It is a mobile phone with an octa-core processor clocked at 1.7GHz, has 1Gb of RAM and 16Gb of internal memory storage. Processor is much more powerful than other phones that have quad core with 1.3GHz clock. It tells Antutu benchmark of a whopping 28,000. Yes, this phone has Antutu of 28,000 which is impressive. Screen is 5 inch 1280x720p resolution which is much better than the competition due to an excellent display of black, the images are dynamic, IPS screen is really superb and the detail about it below. There is also a quad graphics chip Mali-450 MP4 why we can enjoy all, even the most demanding 3D games with Google Play.

What CUBOT X6 is still adorns compact, easy-it has only 158 grams, has a thickness of only 8-9mm and a battery of 2200mAh is much stronger than the one that is ino Inew v3. What some people may not mind, and to me the first moment is that his physical buttons (options, home and back) are not lighted. That is, they are painted in a different color but not bright. Also there is no notification LED so you will not know if you have missed calls or new messages. It’s not so much a lack but well, I got used to that.

There is one more thing I almost forgot to tell you-Mobile supports OTG ie yo can connect a USB memory, hard drive, keyboard or mouse, and will work without problems- I tested.

Opening from the box 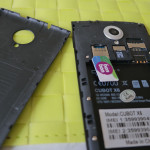 Cubot X6 comes in a beautiful white box and Cubot this time put more luxurious equipment than usual. In addition to mobile phone of course, comes a battery of 2200mAh, modern holsters to overlap. Headphones that are somewhat better than the standard, OTG cable, which allows you to connect a variety of devices on a cell phone, a USB cable and charger.

What I am very pleasantly surprised when I took a cell phone in hand is that it has high quality manufacturing. Absolutely nothing creaks, it is comfortable to hold in your hands. Surface is not smooth, which slides into the hands but a little gummy and my phone is sophisticated. Not cheap junk that I experienced in some other Chinese mobile phones. I had recently Zopo in hands but this Cubot X6 is making a step above him.

First start was fast, Cubot changed the animation at the beginning, which is now somewhat improved but is still burning music a little silly and unnecessary. You will be welcomed us immediately welcome screen where we can change the languagebecause phone has more than 20 languages.

The device has Google Play and ourselves can download other applications such as Google Chrome, Gmail, YouTube and others. Phone doesn’t  bring any unnecessary or Chinese application so this is another advantage. 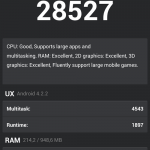 Mobile phone has the latest generation of processors octa core MTK6592 (8 × 1.7GHz), which is much stronger than the previous generation and the graphics chip is wuad core Mali450 (say CUBOT GT99 has a single-core). As the previous generation could trigger more advanced type games Real Racing 3, Dead Trigger 2, Despicable Me, and no other problems with good gameplay, this means that you will show to be even faster and will support all mobile apps / games that are coming out in the near and distant future. Open all applications is quick, no hiccup. Screen precisely accepts commands and the response is excellent, does not have to be hard-pressed, despite the foil and light touches nicely identified. Benchmark Result approximately 28000-29 000 This information tells us how the mobile phone is really powerful, it is so impressive, imagine that you have a powerful machine when you get that information.

13mpx camera and FullHD video is pretty good but I had a little problem that is steadily during cloudy and rainy, so I was not able to discover all the possibilities of the camera. Apparently the camera is 8Mpx which can save as 13mpx but do not really see the difference between the two resolutions, so I can not say what exactly. In any case, the images are sufficiently detailed, colors are present on a Full HD video (1920×1080) can be seen on the registration of cars at a greater distance. Auto focus is nice and smooth sharpen the picture and there is a possibility of shooting with HDR option. The cell phone has two cameras, rear and front of 8Mpx of 5MPX for selfies, Skype conversations and what you think is used. The flash is good, actually the best of all Chinese cell phone that I’ve ever had.

It is hard to take photos on rain

The battery of 2200mAh brings autonomy of 2-3 days in low utilization or day and a half if you use it more often. This is quite normal for Android phones, some people filled every night. A special advantage of the optimized software in spite of constantly inflamed wi-fi overnight he lost only 1% of the battery. In stand-by in mobile practically nothing and spent the same good advantage of this mobile phone. CUBOT X6 also has a screen top quality primarily to show the colors. Figure below shows the old phone GT99 which is actually black and gray light of the outbreak 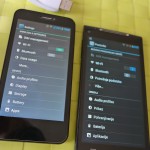 In CUBOT X6 Black is black, the colors are extremely dynamic, the visibility of the screen from any angle is equal, no discoloration due to IPS screen. I have to admit that the screen is a bit less illuminated the strongest setting, but it is quite enough to see the sun. Mobile phone already comes with one set film on the screen and in the package you’re in for another film. It does not scratch and it looks like it will take. Watching movies is pure pleasure on the phone, the longer you play the more advanced games not heated, it was only moderately warm in the area around where the camera is located and processor. The housing and the cover is made of quality plastic, no creaks, cell phone looks sophisticated and expensive when you or a foreigner holding in your hands.

And one interesting thing is that you get a case with a cell phone. It does not only serve to protect cell phone, but you can turn to mobile phone becomes a small TV where watching movies. Lightweight, high quality and another advantage of the sensor on the phone is that when you close the cell phone holster automatically locked and open when it comes on screen. 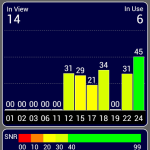 The device has Bluetooth that works normally, whose WiFi signal is compared with other phones stronger for dot or two, reception is solid and GPRS / HSPA / EDGE connection works on all mobile network operators. Here we note that 3G only works in one of two SIM cards and the other is MicroSIM. What irritated me a bit is that it is impossible to hide the unavailability of other network sim card since I mostly use only one sim card but not too big a problem.

While some old Chinese mobile phones have problems with GPS here one of the best I’ve seen so far. The most accurate of all of Chinese people who have had without the help of the Internet, that is included wi-fi hot seat, without a guide and helper applications, all satellites is found in a few seconds with high accuracy of 3m. In practice, good navigation, there is no accommodation in the wrong street. If you run the My Tracks or another application that tracks your movement will be identical to what route you ran, without deviation. If a lot of traveling and you have this mobile phone in the car he will be of great help.

The speaker is really good, the sound is clean. The range is large because the weakest sound is very quiet while the loudest loud enough to hear the bell at full bus or listening to rock music with friends.

OTG allows you to connect USB devices to a mobile phone using a special cable that comes bundled. I tried to connect a mouse, keyboard, USB stick and everything works.

Cubot X6 has surpassed all my expectations. This is an extremely phone, much better than old Cubots, the workmanship of his high-level  and cost as little as $ 172. If somebody said that around 200$ you can get eight-core mobile phone with all the possible things that this can be, the man I would notbelive that mone. But this phone has it all. I bought it from Banggood where is the cheapest, free delivery across Sweden and Germany post office but the package will most likely end up at customs and you will pay tax of about+20$ more since the package from China (depends  on the country). All in all, I am very pleased with the phone. Eventually I’ll fill review and you can leave all questions in the comments.

On Banggood Cubot X6 costs 169$ with -10$ coupon which I can share in comments, and there is the cheapest.